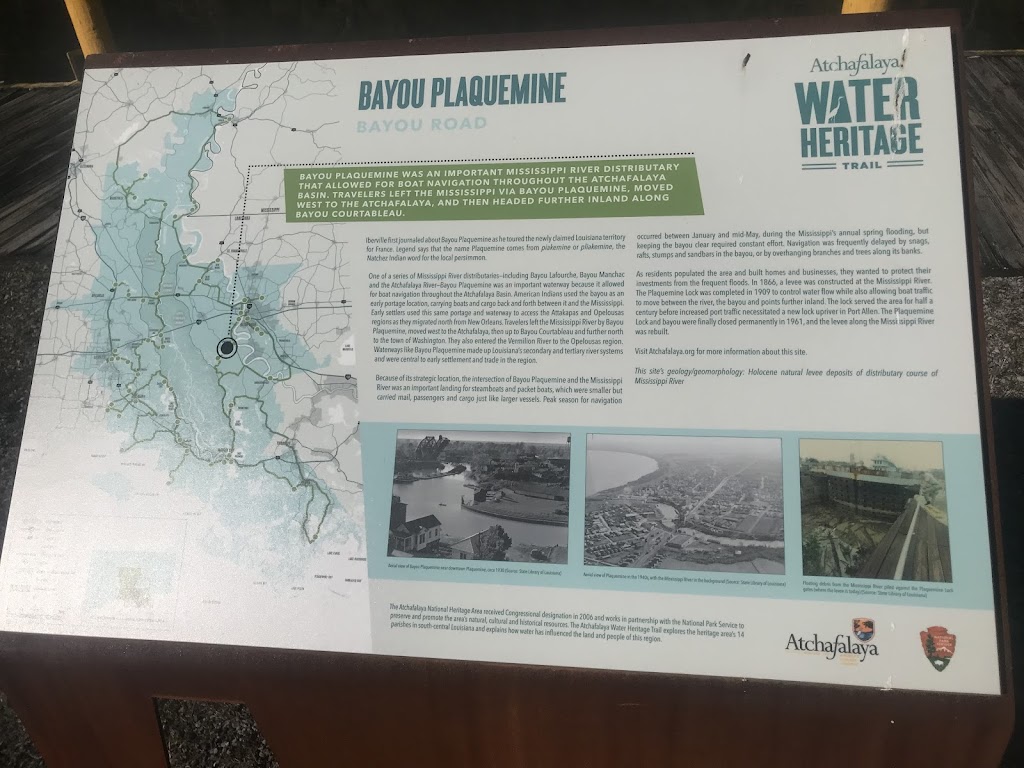 Iberville first journaled about Bayou Plaquemine as he toured the newly claimed Louisiana territory for France. Legend says that the name Plaquemine comes from piakemine or pliakemine, the Natchez Indian word for the local persimmon.

One of a series of Mississippi River distributaries—including Bayou Lafourche, Bayou Manchac and the Atchafalaya River—Bayou Plaquemine was an important waterway because it allowed for boat navigation throughout the Atchafalaya Basin. American Indians used the bayou as an early portage location, carrying boats and cargo back and forth between it and the Mississippi. Early settlers used this same portage and waterway to access the Attakapas and Opelousas regions as they migrated north from New Orleans. Travelers left the Mississippi River by Bayou Plaquemine, moved west to the Atchafalaya, then up to Bayou Courtableau and further north to the town of Washington. They also entered the Vermilion River to the Opelousas region. Waterways like Bayou Plaquemine made up Louisiana’s secondary and tertiary river systems and were central to early settlement and trade in the region.

Because of its strategic location, the intersection of Bayou Plaquemine and the Mississippi River was an important landing for steamboats and packet boats, which were smaller but carried mail, passengers and cargo just like larger vessels. Peak season for navigation occurred between January and mid-May, during the Mississippi’s annual spring flooding, but keeping the bayou clear required constant effort. Navigation was frequently delayed by snags, rafts, stumps and sandbars in the bayou, or by overhanging branches and trees along its banks.

As residents populated the area and built homes and businesses, they wanted to protect their investments from the frequent floods. In 1866, a levee was constructed at the Mississippi River. The Plaquemine Lock was completed in 1909 to control water flow while also allowing boat traffic to move between the river, the bayou and points further inland. The lock served the area for half a century before increased port traffic necessitated a new lock upriver in Port Allen. The Plaquemine Lock and bayou were finally closed permanently in 1961, and the levee along the Mississippi River was rebuilt.