Woodlawn High School and the Struggle for Racial Equality 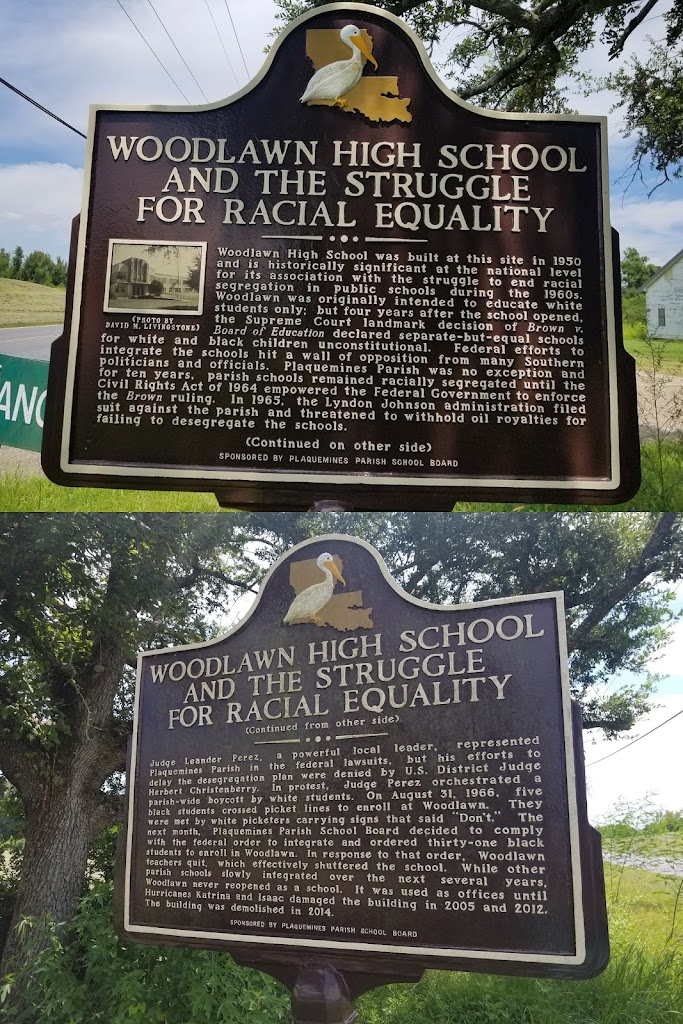 Woodlawn High School was built at this site in 1950 and is historically significant at the national level for its association with the struggle to end racial segregation in public schools during the 1960s. Woodlawn was originally intended to educate white students only; but four years after the school opened, the Supreme Court landmark decision of Brown v. Board of Education declared separate-but-equal schools for white and black children unconstitutional. Federal efforts to integrate the schools hit a wall of opposition from many Southern politicians and officials. Plaquemines Parish was no exception and for ten years, parish schools remained racially segregated until the Civil Rights Act of 1964 empowered the Federal Government to enforce the Brown ruling. In 1965, the Lyndon Johnson administration filed suit against the parish and threatened to withhold oil royalties for failing to desegregate the schools.(Continued on other side)

(Continued from other side)Judge Leander Perez, a powerful local leader, represented Plaquemines Parish in the federal lawsuits, but his efforts to delay the desegregation plan were denied by U.S. District Judge Herbert Christenberry. In protest, Judge Perez orchestrated a parish-wide boycott by white students. On August 31, 1966, five black students crossed picket lines to enroll at Woodlawn. They were met by white picketers carrying signs that said "Don't." The next month, Plaquemines Parish School Board decided to comply with the federal order to integrate and ordered thirty-one black students to enroll in Woodlawn. In response to that order, Woodlawn teachers quit, which effectively shuttered the school. While other parish schools slowly integrated over the next several years, Woodlawn never reopened as a school. It was used as offices until Hurricanes Katrina and Isaac damaged the building in 2005 and 2012. The building was demolished in 2014.