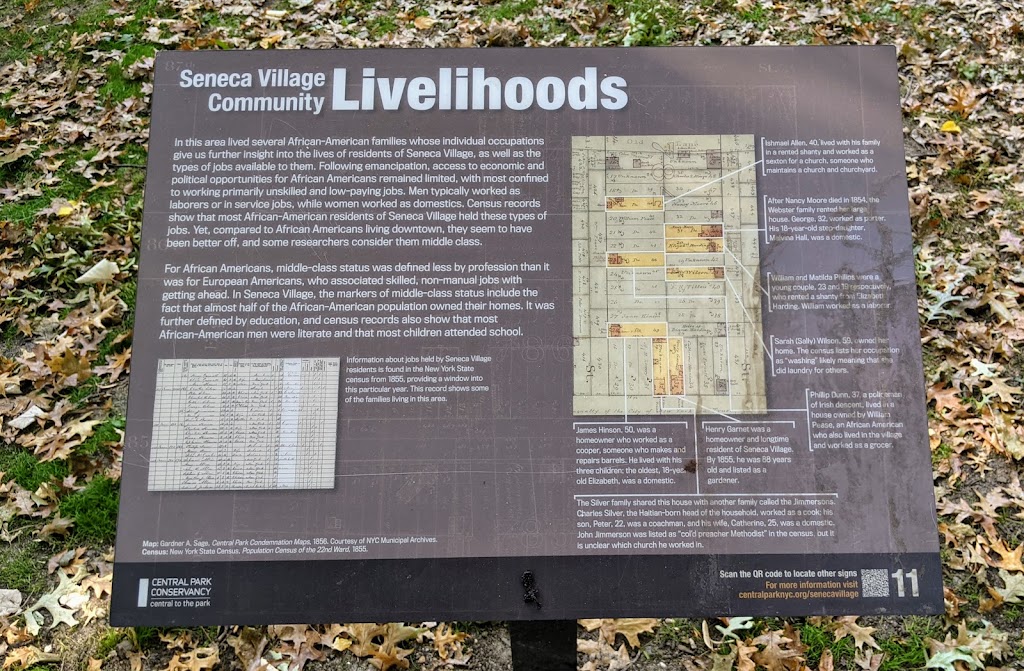 Seneca Village Community
Livelihoods
In this area lived several African-American families whose individual occupations give us further insight into the lives of residents of Seneca Village, as well as the types of jobs available to them. Following emancipation, access to economic and political opportunities for African Americans remained limited, with most confined to working primarily unskilled and low-paying jobs. Men typically worked as laborers or in service jobs, while women worked as domestics. Census records show that most African-American residents of Seneca Village held these types of jobs. Yet, compared to African Americans living downtown, they seem to have been better off, and some researchers consider them middle class.
For African Americans, middle-class status was defined less by profession than it was for European Americans, who associated skilled, non-manual jobs with getting ahead. In Seneca Village, the markers of middle-class status include the fact that almost half of the African-American population owned their homes. It was further defined by education, and census records also show that most African-American men were literate and that most children attended school.
Information about jobs held by Seneca Village residents is found in the New York State census from 1855, providing a window into this particular year. This record shows some of the families living in this area.
Ishmael Allen, 40, lived with his family in a rented shanty and worked as a sexton for a church, someone who maintains a church and churchyard.
After Nancy Moore died in 1854, the Webster family rented her large house, George, 32, worked as porter. His 18-year-old step-daughter. Melvina Hall, was a domestic.
William and Matilda Philips were a young couple, 23 and 19 respectively, who rented a shanty from Elizabeth Harding. William worked as a laborer.
Sarah (Sally) Wilson, 59, owned her home. The census lists her occupation as "washing" likely meaning that she did laundry for others.
Phillip Dunn, 37, a policeman of Irish descent, lived in a house owned by Willa Pease, an African American who also lived in the village and worked as a grocer.

James Hinson, 50, was a homeowner who worked as a cooper, someone who makes and repairs barrels. He lived with his three children; the oldest, 18-year-old Elizabeth, was a domestic.
Henry Garnet was a homeowner and longtime resident of Seneca Village. By 1855, he was 88 years old and listed as a gardener.
The Silver family shared this house with another family called the Jimmersons. Charles Silver, the Haitian-born head of the household, worked as a cook; his son, Peter, 22, was a coachman, and his wife, Catherine, 25, was a domestic. John Jimmerson was listed as "col'd preacher Methodist" in the census, but it is unclear which church he worked in.
Map: Gardner A. Sage, Central Park Condemnation Maps, 1856. Courtesy of NYC Municipal Archives. Census: New York State Census, Population Census of the 22nd Ward, 1855.