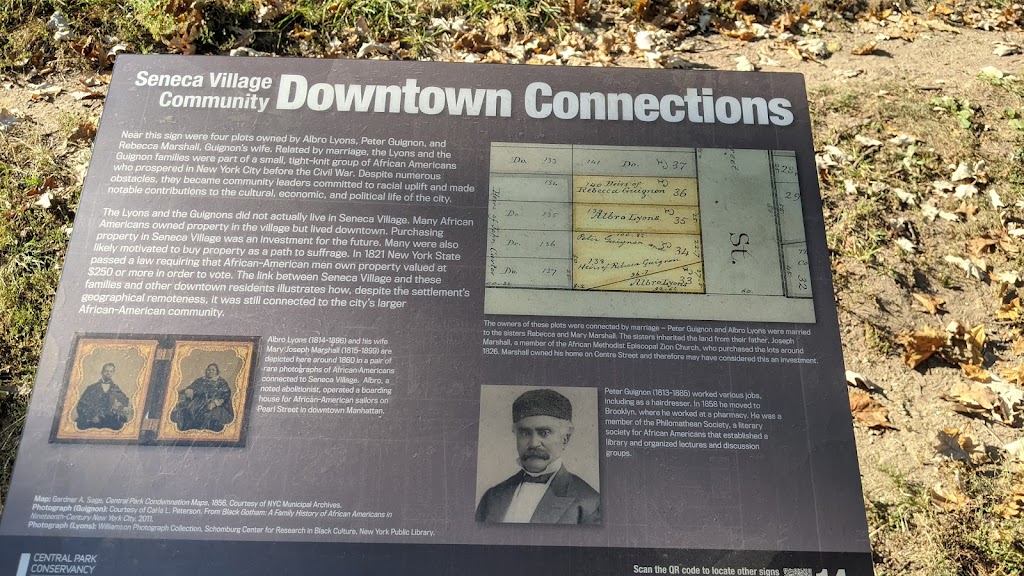 Downtown Connections
Near this sign were four plots owned by Albro Lyons, Peter Guignon, and Rebecca Marshall, Guignon's wife. Related by marriage, the Lyons and the Guignon families were part of a small, tight-knit group of African Americans who prospered in New York City before the Civil War. Despite numerous obstacles, they became community leaders committed to racial uplift and made notable contributions to the cultural, economic, and political life of the city.
The Lyons and the Guignons did not actually live in Seneca Village. Many African Americans owned property in the village but lived downtown. Purchasing property in Seneca Village was an investment for the future. Many were also likely motivated to buy property as a path to suffrage. In 1821 New York State passed a law requiring that African-American men own property valued at $250 or more in order to vote. The link between Seneca Village and these families and other downtown residents illustrates how, despite the settlement's geographical remoteness, it was still connected to the city's larger African-American community.
Albro Lyons (1814-1896) and his wife Mary Joseph Marshall (1815-1899) are depicted here around 1860 in a pair of rare photographs of African Americans connected to Seneca Village. Albro, a noted abolitionist, operated a boarding house for African-American sallors on Pearl Street in downtown Manhattan.
The owners of these plots were connected by marriage - Peter Guignon and Albro Lyons were married to the sisters Rebecca and Mary Marshall. The sisters inherited the land from their father, Joseph Marshall, a member of the African Methodist Episcopal Zion Church, who purchased the lots around 1826. Marshall owned his home on Centre Street and therefore may have considered this an investment.
Peter Guignon (1813-1885) worked various jobs, including as a hairdresser. In 1858 he moved to Brooklyn, where he worked at a pharmacy. He was a member of the Philomathean Society, a literary society for African Americans that established a library and organized lectures and discussion groups.