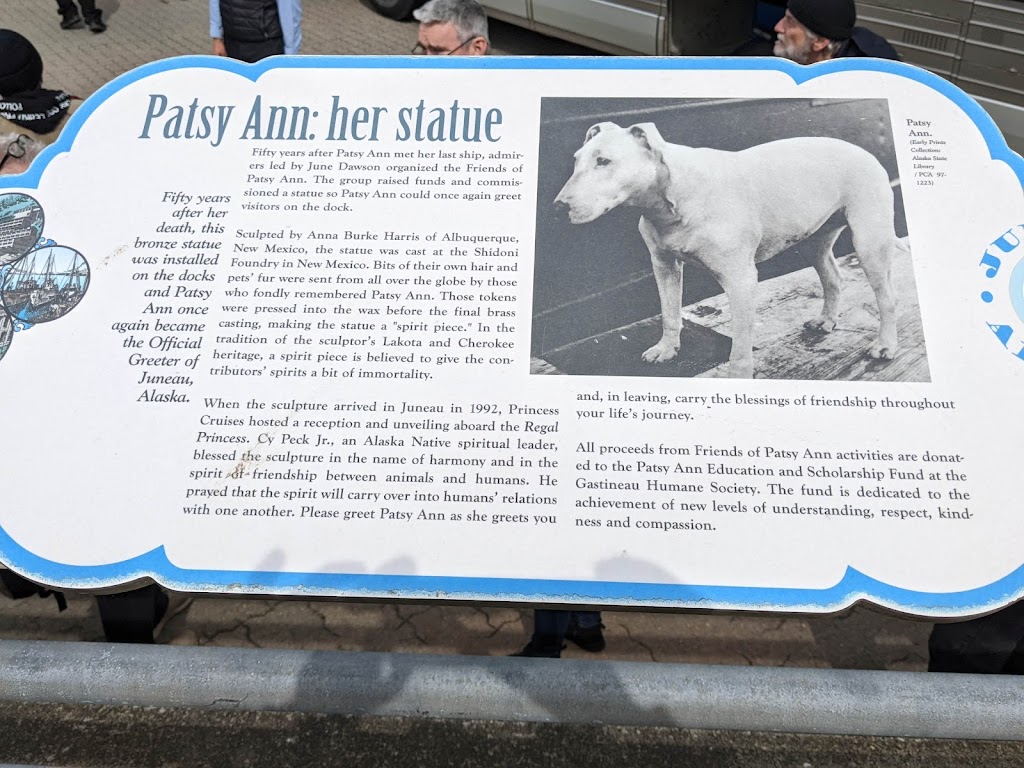 Fifty years after her death, this bronze statue was installed on the docks and Patsy Ann once again became the Official Greeter of Juneau, Alaska.

Fifty years after Patsy Ann met her last ship, admirers led by June Dawson organized the Friends of Patsy Ann.  The group raised funds and commissioned a statue so Patsy Ann could once again greet visitors on the dock.

Sculpted by Anna Burke Harris of Albuquerque, New Mexico, the statue was cast at the Shidoni Foundry in New Mexico. Bits of their own hair and pets' fur were sent from all over the globe by those who fondly remembered Patsy Ann.  Those tokens were pressed into the wax before the final brass casting, making the statue a "spirit piece." In the tradition of the sculptor's Lakota and Cherokee heritage, a spirit piece is believed to give the contributors' spirits a bit of immortality.

When the sculpture arrived in Juneau in 1992, Princess Cruises hosted a reception and unveiling aboard the Regal Princess.  Cy Peck Jr., an Alaska Native spiritual leader, blessed the sculpture in the name of harmony and in the spirit of friendship between animals and humans.  He prayed that the spirit will carry over into humans' relations with one another.  Please greet Patsy Ann as she greets you and, in leaving, carry the blessings of friendship throughout your life's journey.

All proceeds from Friends of Patsy Ann activities are donated to the Patsy Ann Education and Scholarship Fund at the Gastineau Humane Society.  The fund is dedicated to the achievement of new levels of understanding, respect, kindness and compassion.