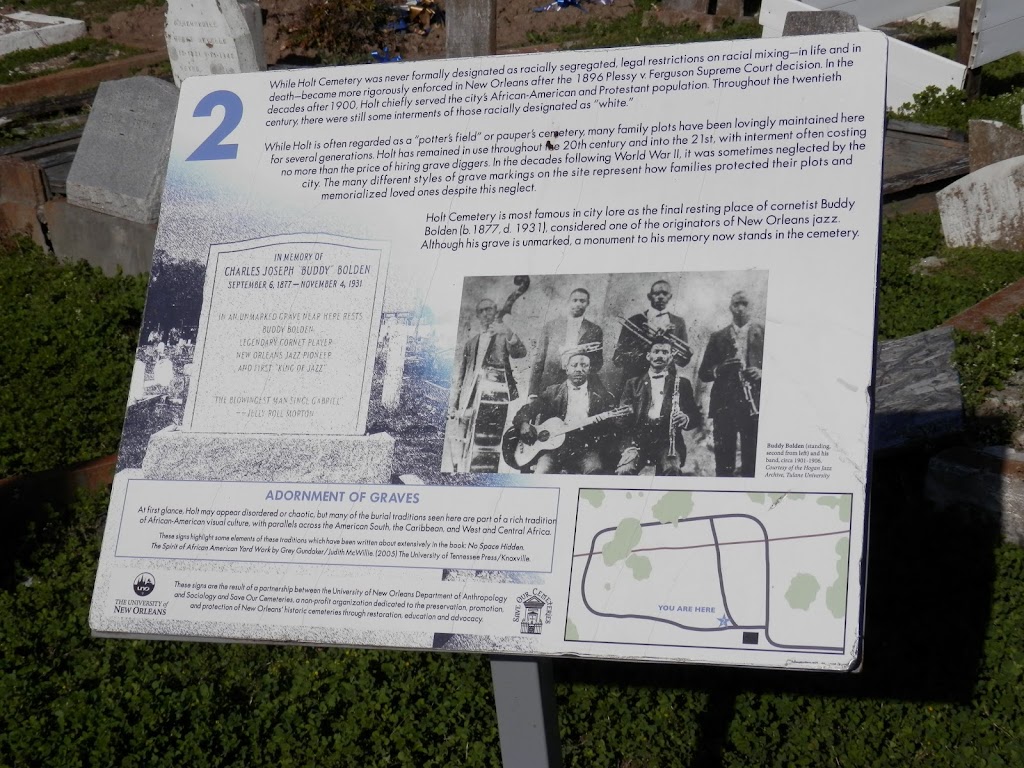 While Holt Cemetery was never formally designated as racially segregated, legal restrictions on racial mixing - in life and death - became more rigorously enforced in New Orleans after the 1896 Plessy v. Ferguson Supreme Court decision. In the decades after 1900, Holt chiefly served the city's African-American and Protestant population. Throughout the twentieth century, there were still some internments of those racially designated as "white".

While Holt is often regarded as a "potter's field" or pauper's cemetery, many family plots have been lovingly maintained here for several generations. Holt has remained in use throughout the 20th century and into the 21st, with internment often costing no more than the price of hiring grave diggers, In the decades following World War II, it was sometimes neglected by the city. The many different styles of grave markings on the site represent how families protected their plots and memorialized loved ones despite this neglect.

Holt Cemetery is most famous in city lore as the final resting place of cornetist Buddy Bolden (b. 1877, d. 1931), considered one of the originators of New Orleans jazz. Although his grave is unmarked, a monument to his memory now stands in the cemetery.

Adornment of Graves
At first glance, holt may appear disordered or chaotic, but many of the burial traditions seen here are part of the rich tradition of African-American visual culture, with parallels across the American South, the Caribbean and West and Central Africa.

These signs are the result of a partnership between the University of New Orleans Department of Anthropology and Sociology and Save Our Cemeteries, a non-profit organization dedicated to the preservation, promotion and protection of New Orleans' historic cemeteries through restoration, education and advocacy.