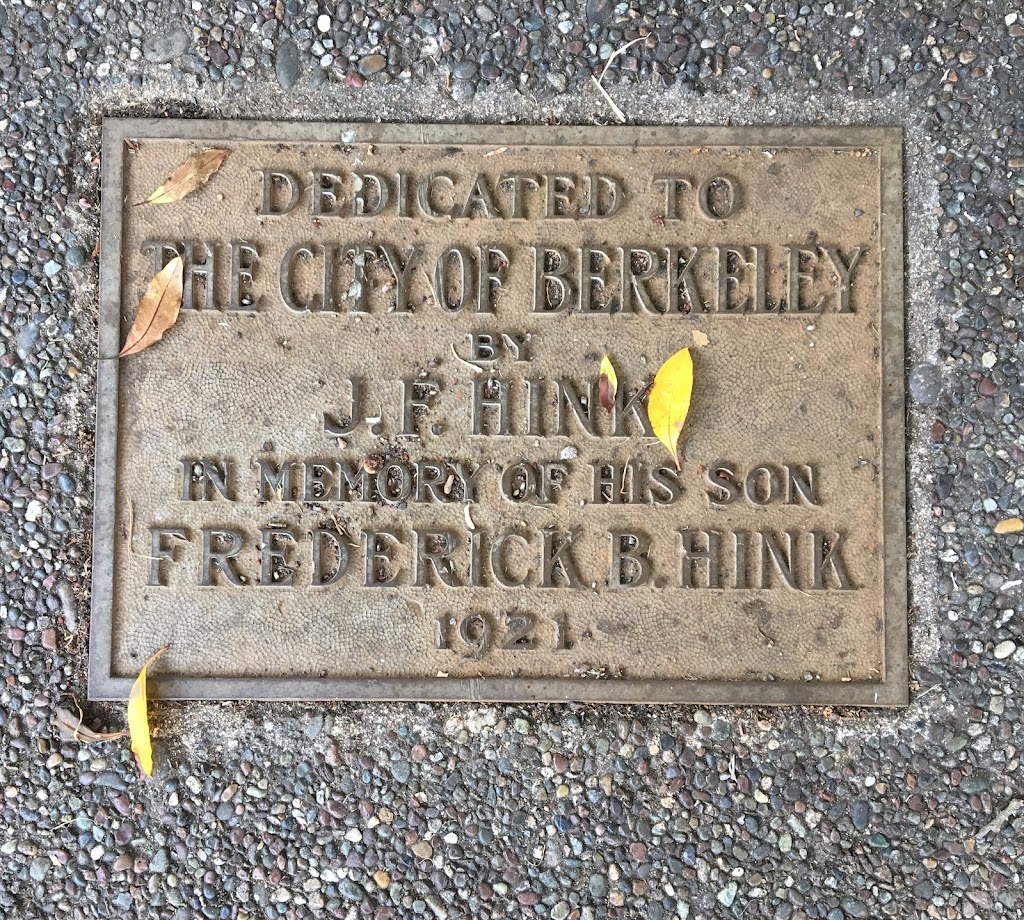 'Dedicated to the City of Berkeley by J.F. Hink in Memory of his son Frederick. 1921.'

I've walked by this little plot, at the corner of Arlington Avenue and Yosemite Road, north of Berkeley's Marin Circle, many times. I didn't stop by, or see the plaque, until today.

I've been in Berkeley long enough -- but just long enough -- to recognize "Hink" as the name of Berkeley's very own department store. It was on Shattuck Avenue at Kittredge Street, in the same building that now houses the Shattuck Cinemas (among other concerns).

Anyway: any time I see a parent having dedicated something in memory of a child, I think family tragedy. In this case, Frederick B. Hink was the grown son of J.F. Hink. Both father and son were in mercantile trade. J.F.'s business gave rise to Hink's department store. Frederick, whom the Berkeley Gazette reported was 42 when he died "after a long illness" in January 1920, was a principal in an Oakland department store, Taft and Pennoyer's. (No, never heard of them.)

The year after he died, J.F. Hink gave the little triangle of land on Arlington (or "The" Arlington as some style it) to the city. But in evidence that Berkeley had a cranky side, not everyone in town was happy with name of the new space, Frederick Park. The Sept. 16, 1921, Gazette told the tale:

Objects to Name of Frederick Park

Councilman Carl Bartlett let it be known this morning that he has no love for anything German, not even names. At this morning's council meeting he objected to the name "Frederick Park" being given to the new acre park at Arlington Avenue, which the city accepted last Tuesday from J.W. Hink [sic], a local merchant.

"The war is over," remarked Councilman Heywood with a smile.

"I know that," replied Councilman Bartlett, real seriously, "but during the war we dropped German names and I don't care to add any of them now."