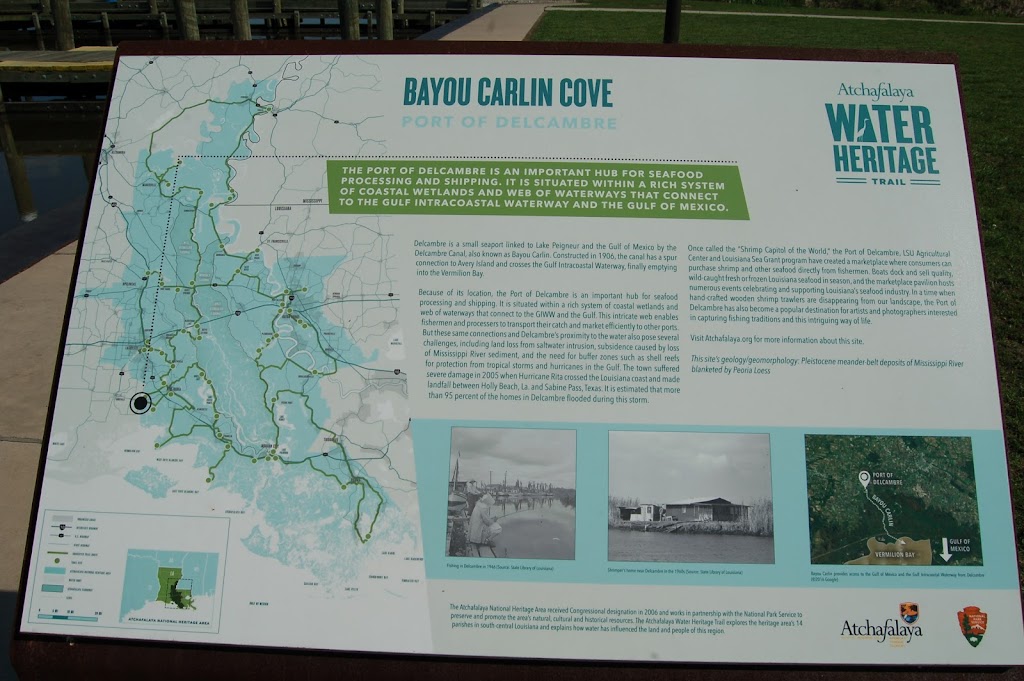 Delcambre is a small seaport linked to Lake Peigneur and the Gulf of Mexico by the Delcambre Canal, also known as Bayou Carlin. Constructed in 1906, the canal has a spur connection to Avery Island and crosses the Gulf Intracoastal Waterway, finally emptying into the Vermilion Bay.

Because of its location, the Port of Delcambre is an important hub for seafood processing and shipping. It is situated within a rich system of coastal wetlands and web of waterways that connect to the GIWW and the Gulf. This intricate web enables fishermen and processors to transport their catch and market efficiently to other ports. But these same connections and Delcambre’s proximity to the water also pose several challenges, including land loss from saltwater intrusion, subsidence caused by loss of Mississippi River sediment, and the need for buffer zones such as shell reefs for protection from tropical storms and hurricanes in the Gulf. The town suffered severe damage in 2005 when Hurricane Rita crossed the Louisiana coast and made landfall between Holly Beach, La. and Sabine Pass, Texas. It is estimated that more than 95 percent of the homes in Delcambre flooded during this storm.

Once called the “Shrimp Capitol of the World,” the Port of Delcambre, LSU Agricultural Center and Louisiana Sea Grant program have created a marketplace where consumers can purchase shrimp and other seafood directly from fishermen. Boats dock and sell quality, wild-caught fresh or frozen Louisiana seafood in season, and the marketplace pavilion hosts numerous events celebrating and supporting Louisiana’s seafood industry. In a time when hand-crafted wooden shrimp trawlers are disappearing from our landscape, the Port of Delcambre has also become a popular destination for artists and photographers interested in capturing fishing traditions and this intriguing way of life.