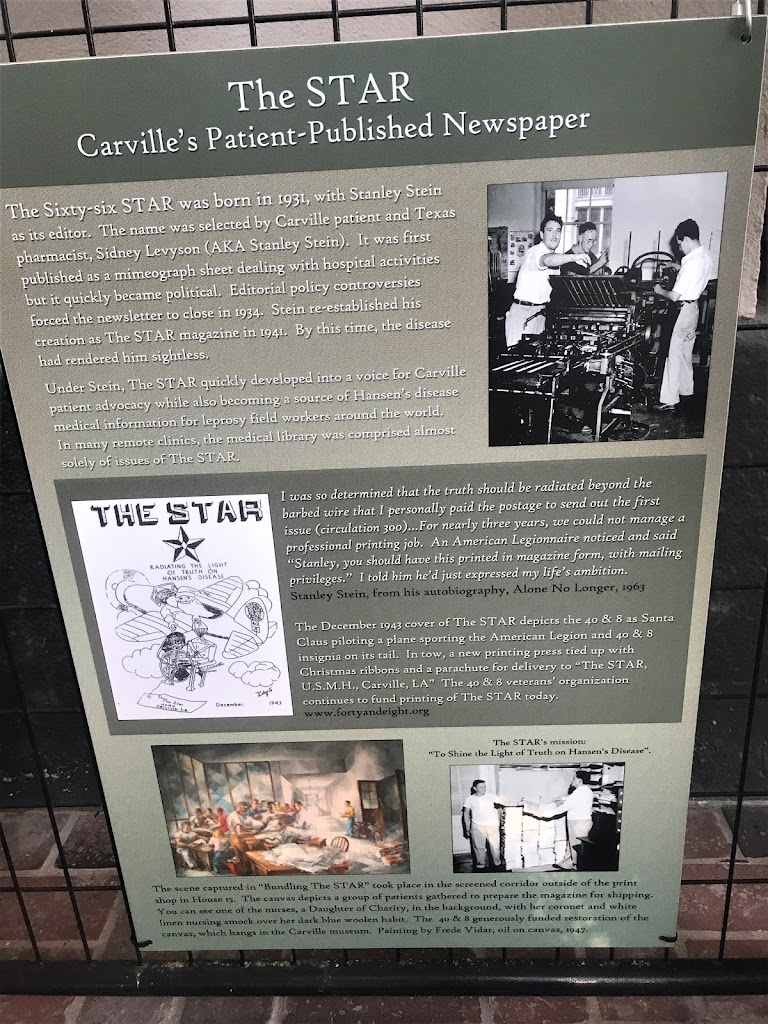 The Sixty-six STAR was born in 1931, with Stanley Stein as its editor. The name was selected by Carville patient and Texas pharmacist, Stanley Levyson (AKA Stanley Stein). It was first published as a mimeograph sheet dealing with hospital activities but quickly became political. Editorial policy controversies forced the newspaper to close in 1934. Stein re-established his creation as The STAR magazine in 1941. By this time, the disease had rendered him sightless.

Under Stein, The STAR quickly developed into a voice for Carville patient advocacy while also becoming a source of Hansen's disease medical information for leprosy field workers around the world. In many remote clinics, the medical library was comprised almost solely of issues of The STAR.

I was so determined that the truth should be radiated beyond the barbed wire that I personally paid the postage to send out the first issue (circulation 300)... For nearly three years, we could not manage a professional printing job. An American Legionnaire noticed and said "Stanley, you should have this printed in magazine form, with mailing privileges." I told him he'd just expressed my life's ambition. Stanley Stein, from his autobiography, Alone No Longer, 1963

The December 1943 cover of The STAR depicts the 40 & 8 as Santa Claus piloting a plane sporting the American Legion and 40 & 8 insignia on its tail. In yow, a new printing press tied up with Christmas ribbons and a parachute for delivery to "The STAR, U.S.M.H., Carville, LA" The 40 & 8 veterans' organization continues to fund printing of The STAR today. www.fortyandeight.org

The scene captured in "Bundling The STAR" took place in a screened corridor outside of the print shop in House 15. The canvas depicts a group of patients gathered to prepare the magazine for shipping. You can see one of the nurses, a Daughter of Charity, in the background, with her coronet and white linen nursing smock over her dark blue woolen habit. The 40 & 8 generously funded restoration of the canvas, which hangs in the Carville Museum. Painting by Frede Vidar, oil on canvas, 1947.