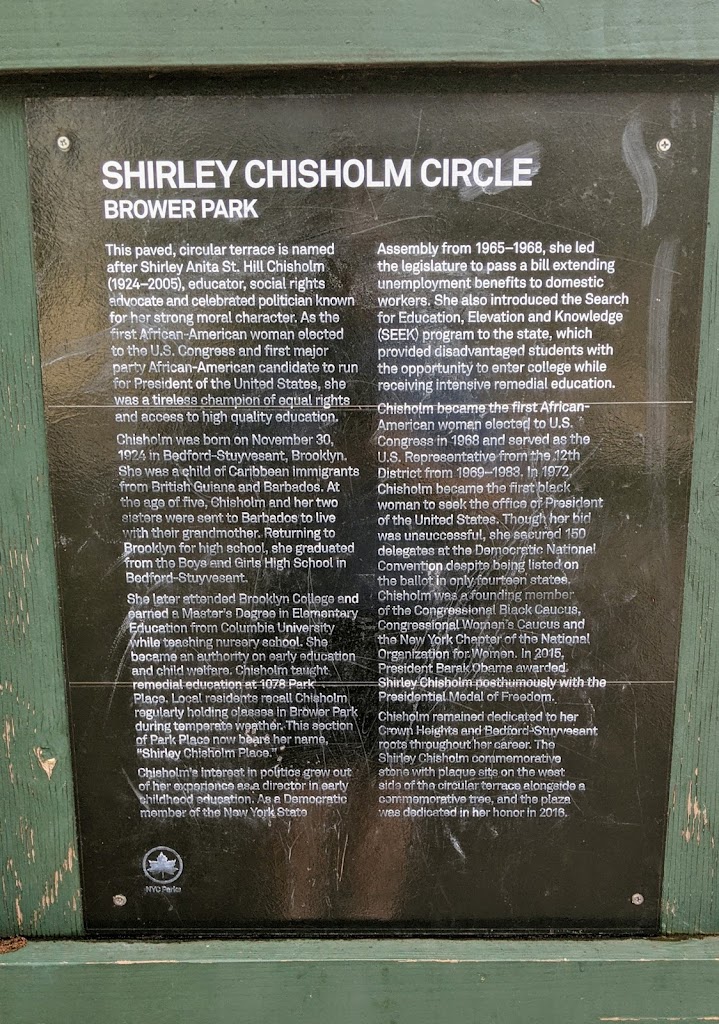 This paved, circular terrace is named after Shirley Anita St. Hill Chisholm (1924-2005), educator, social rights advocate and celebrated politician known for her strong moral character. As the first African-American woman elected to the U.S. Congress and first major
party African-American candidate to run for President of the United States, she was a tireless champion of equal rights and access to high quality education.

Chisholm was born on November 30, 1924 in Bedford-Stuyvesant, Brooklyn. She was a child of Caribbean immigrants from British Guiana and Barbados. At the age of five, Chisholm and her two sisters were sent to Barbados to live with their grandmother. Returning to Brooklyn for high school, she graduated from the Boys and Girls High School in Bedford-Stuyvesant.

Chisholm's interest in politics grew out of her experience as a director in early childhood education. As a Democratic member of the New York State Assembly from 1965-1968, she led the legislature to pass a bill extending unemployment benefits to domestic workers. She also introduced the Search for Education, Elevation and Knowledge (SEEK) program to the state, which provided disadvantaged students with the opportunity to enter college while receiving intensive remedial education.

Chisholm became the first African American women elected to U.S. Congress in 1968 and served as the U.S. Representative from the 12th District from 1969-1983. In 1972, Chisholm became the first black woman to seek the office of President of the United States. Though her bid was unsuccessful, she secured 150 delegates at the Democratic National Convention despite being listed on the ballot in only fourteen states. Chisholm was a founding member of the Congressional Black Caucus, Congressional Women's Caucus and the New York Chapter of the National Organization for Women. In 2015, President Barack Obama awarded Shirley Chisholm posthumously with the Presidential Medal of Freedom.

Chisholm remained dedicated to her Crown Heights and Bedford-Stuyvesant roots throughout her career. The Shirley Chisholm commemorative stone with plaque sits on the west side of the circular terrace alongside a commemorative tree, and the plaza was dedicated in her honor in 2016.