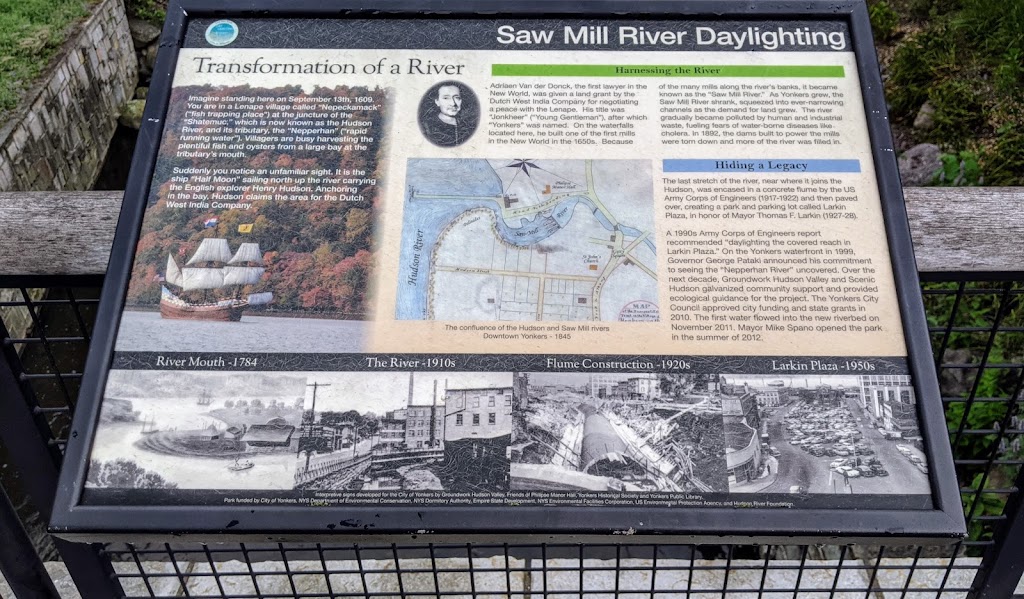 Transformation of a River

Imagine standing here on September 13th, 1609. You are in a Lenape village called "Nepeckamack" ("fish trapping place") at the juncture of the "Shatemuc," which is now known as the Hudson River, and its tributary, the "Nepperhan" ("rapid running water"). Villagers are busy harvesting the plentiful fish and oysters from a large bay at the tributary's mouth.

Suddenly you notice an unfamiliar sight. It is the ship "Half Moon" sailing north up the river carrying the English explorer Henry Hudson. Anchoring in the bay, Hudson claims the area for the Dutch West India Company.
Harnessing the River
Adriaen Van der Donck, the first lawyer in the New World, was given a land grant by the Dutch West India Company for negotiating a peace with the Lenape. His title was "Jonkheer" ("Young Gentleman"), after which "Yonkers" was named. On the waterfalls located here, he built one of the first mills in the New World in the 1650s. Because of the many mills along the river's banks, it became known as the "Saw Mill River." As Yonkers grew, the Saw Mill River shrank, squeezed into ever-narrowing channels as the demand for land grew. The river gradually became polluted by human and industrial waste, fueling fears of water-borne diseases like cholera, In 1892, the dams built to power the mills were torn down and more of the river was filled in.


Hiding a Legacy
The last stretch of the river, near where it joins the Hudson, was encased in a concrete flume by the US Army Corps of Engineers (1917-1922) and then paved over, creating a park and parking lot called Larkin Plaza, in honor of Mayor Thomas F. Larkin (1927-28).

A 1990s Army Corps of Engineers report recommended "daylighting the covered reach in Larkin Plaza," On the Yonkers waterfront in 1999, Governor George Pataki announced his commitment to seeing the "Nepperhan River" uncovered. Over the next decade, Groundwork Hudson Valley and Scenic Hudson galvanized community support and provided ecological guidance for the project. The Yonkers City Council approved city funding and state grants in 2010. The first water flowed into the new riverbed on November 2011. Mayor Mike Spano opened the park in the summer of 2012.