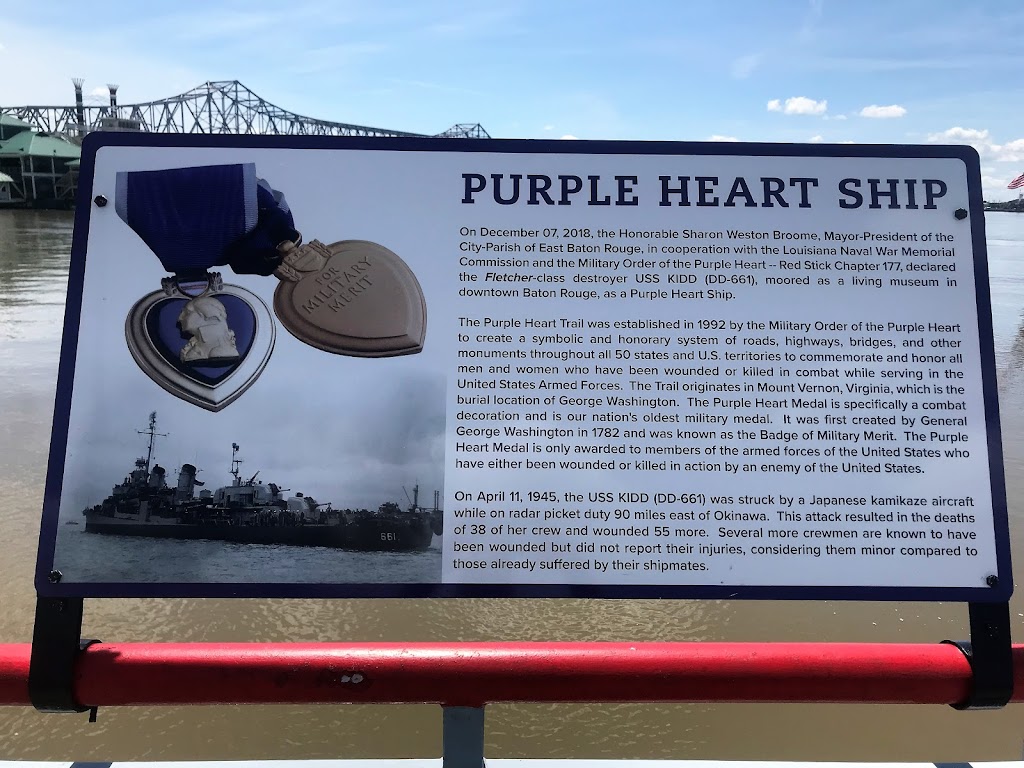 On December 07, 2018, the Honorable Sharon Weston Broome, Mayor-President of the City-Parish of East Baton Rouge, in cooperation with the Louisiana Naval War Memorial Commission and the Military Order of the Purple Heart -- Red Stick Chapter 177, declared the Fletcher-class destroyer USS KIDD (DD-661), moored as a living museum in downtown Baton Rouge, as a Purple Heart Ship.

The Purple Heart Trail was established in 1992 by the Military Order of the Purple Heart to create a symbolic and honorary system of roads, highways, bridges, and other monuments throughout all 50 states and U.S. territories to commemorate and honor all men and women who have been wounded or killed in combat while serving in the United States Armed Forces. The Trail originates in Mount Vernon, Virginia, which is the burial location of George Washington. The Purple Heart Medal is specifically a combat decoration and is our nation''s oldest military medal. It was first created by General George Washington in 1782 and was known as the Badge of Military Merit. The Purple Heart Medal is only awarded to members of the armed forces of the United States who have either been wounded or killed in action by an enemy of the United States.

On April 11, 1945, the USS KIDD (DD-661) was struck by a Japanese kamikaze aircraft while on radar picket duty 90 miles east of Okinawa. This attack resulted in the deaths of 38 of her crew and wounded 55 more. Several more crewmen are known to have been wounded but did not report their injuries, considering them minor compared to those already suffered by their shipmates.