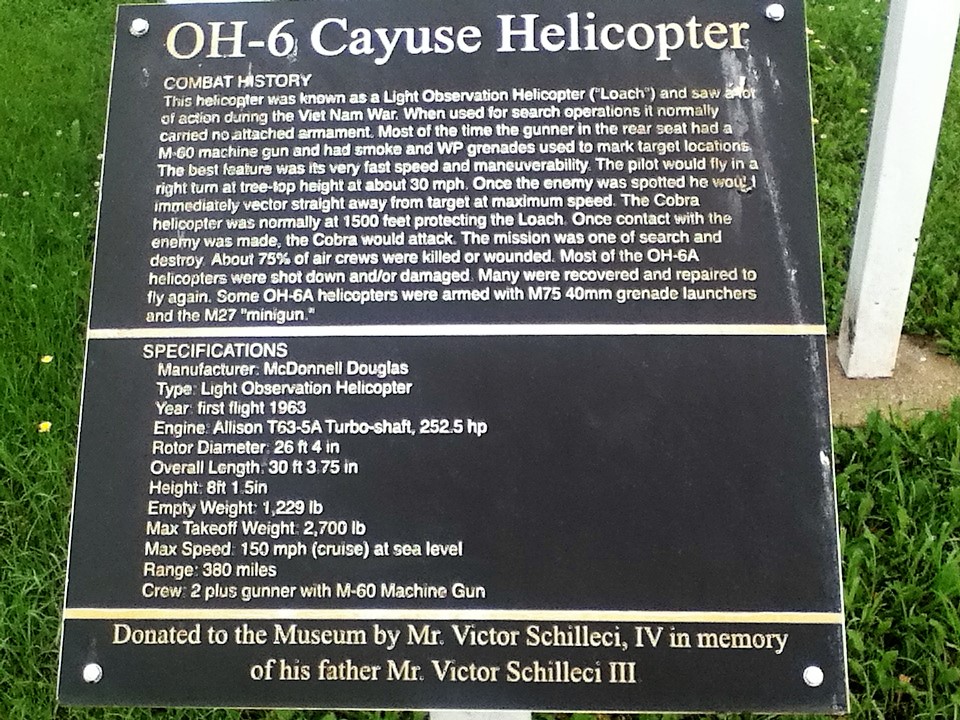 This helicopter was known as a Light Observation Helicopter ("Loach") and saw a lot of action during the Viet Nam War. When used for search operations it normally carried no attached armament. Most of the time the gunner in the rear seat had a M-60 machine gun and had smoke and WP grenades used to mark target locations. The best feature was its very fast speed and maneuverability. The pilot would fly in a right turn at tree-top height at about 30 mph. Once the enemy was spotted he would immediately vector straight away from target at maximum speed. The Cobra helicopter was normally at 1500 feet protecting the Loach. Once contact with the enemy was made, the Cobra would attack. The mission was one of search and destroy. About 75% of air crews were killed or wounded. Most of the OH-6A helicopters were shot down and/or damaged. Many were recovered and repaired to fly again. Some OH-6A helicopters were armed with M75 40mm grenade launchers and the M27 "minigun."
Manufacturer: McDonnell DouglasType: Light Observation HelicopterYear first flight: 1963Engine: Allison T63-5A Turbo-shaft, 252.5 hpRotor Diameter: 26 ft 4 inOverall Length: 30 ft 3 75 inHeight: 8 ft 1.5in Empty Weight: 1,229 lbMax Takeoff Weight: 2,700 lbMax Speed: 150 mph (cruise) at sea levelRange: 380 milesCrew: 2 plus gunner with M-60 Machine Gun