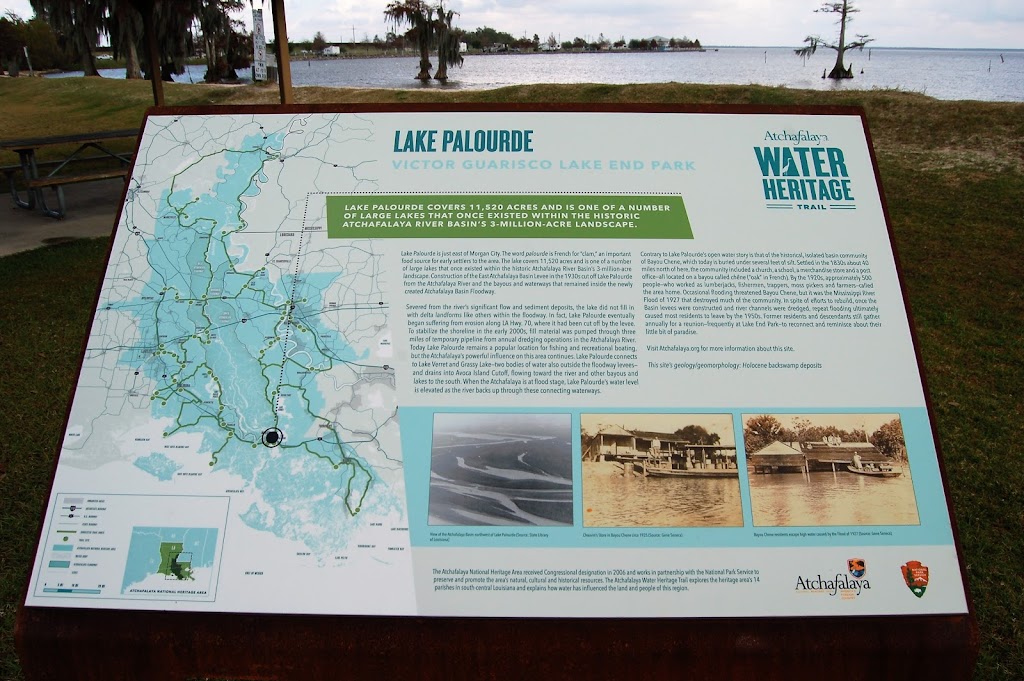 Lake Palourde covers 11,520 acres and is one of a number of large lakes that once existed within the historic Atchafalaya River Basin's 3-million-acre landscape.

Severed from the river’s significant flow and sediment deposits, the lake did not fill in with delta landforms like others within the floodway. In fact, Lake Palourde eventually began suffering from erosion along LA Hwy. 70, where it had been cut off by the levee. To stabilize the shoreline in the early 2000s, fill material was pumped through three miles of temporary pipeline from annual dredging operations in the Atchafalaya River. Today Lake Palourde remains a popular location for fishing and recreational boating, but the Atchafalaya’s powerful influence on this area continues. Lake Palourde connects to Lake Verret and Grassy Lake—two bodies of water also outside the floodway levees—and drains into Avoca Island Cutoff, flowing toward the river and other bayous and lakes to the south. When the Atchafalaya is at flood stage, Lake Palourde’s water level is elevated as the river backs up through these connecting waterways.

Contrary to Lake Palourde’s open water story is that of the historical, isolated basin community of Bayou Chene, which today is buried under several feet of silt. Settled in the 1830s about 40 miles north of here, the community included a church, a school, a merchandise store and a post office—all located on a bayou called chêne (“oak” in French). By the 1920s, approximately 500 people—who worked as lumberjacks, fishermen, trappers, moss pickers and farmers—called the area home. Occasional flooding threatened Bayou Chene, but it was the Mississippi River Flood of 1927 that destroyed much of the community. In spite of efforts to rebuild, once the Basin levees were constructed and river channels were dredged, repeat flooding ultimately caused most residents to leave by the 1950s. Former residents and descendants still gather annually for a reunion—frequently at Lake End Park—to reconnect and reminisce about their little bit of paradise.