Kimberlin on the Brazos Ranch 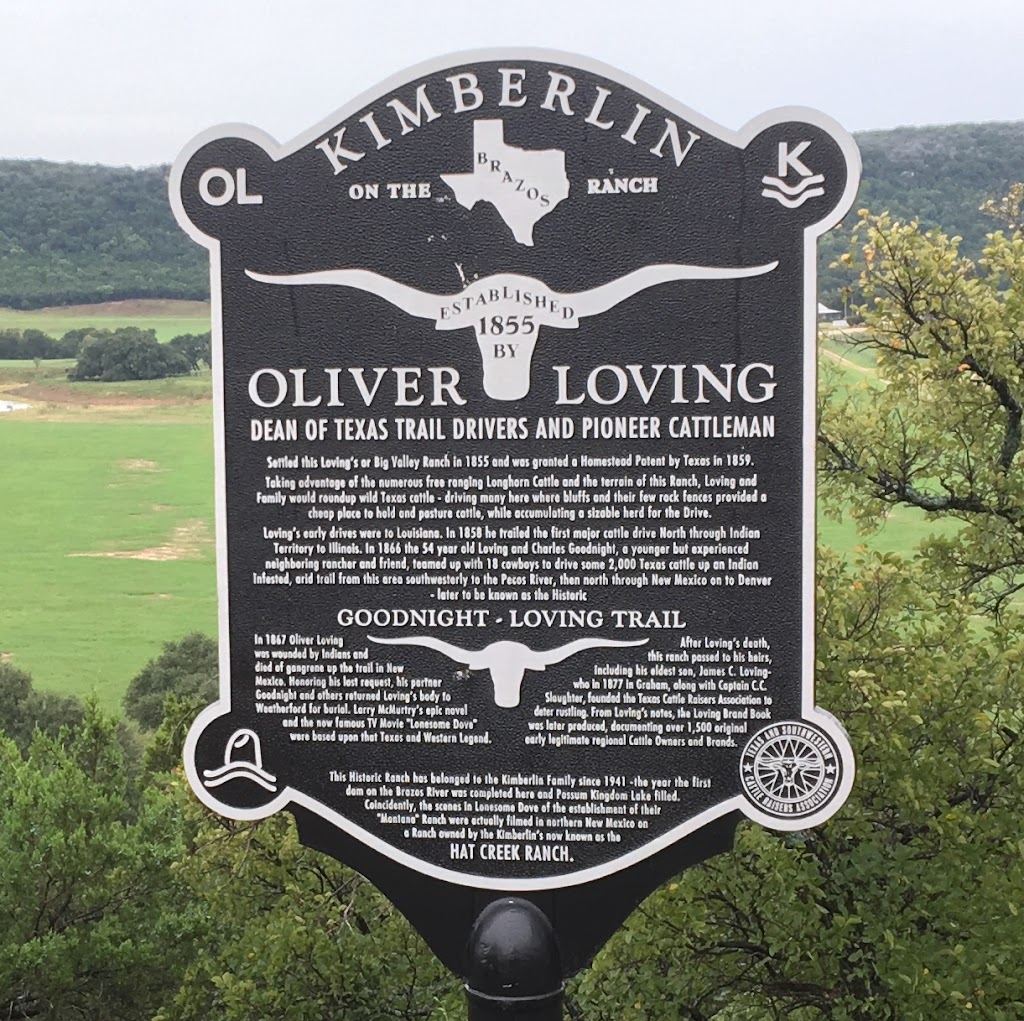 Kimberlin on the Brazos Ranch

Settled this Loving’s or Big Valley Ranch in 1855 and was granted a Homestead Patent by Texas in 1859. Taking advantage of the numerous free-ranging Longhorn Cattle and the terrain of this Ranch, Loving and Family would roundup wild Texas cattle — driving many here where bluffs and their few rock fences provides a cheap place to hold and pasture cattle, while accumulating a sizable herd for the Drive.

Loving’s early drives were to Louisiana. In 1858, he trailed the first major cattle drive North through Indian Territory to Illinois. In 1866 the 54 year old Loving and Charles Goodnight, a younger but experienced neighboring rancher and friend, teamed up with 18 cowboys to drive some 2,000 Texas cattle up an Indian Infested, arid trail from this area southwesterly to the Pecos River, then north through New Mexico on to Denver — later to be known as the historic Goodnight-Loving Trail.

In 1867, Oliver Loving was wounded by Indians and died of gangrene up the trail in New Mexico. Honoring his last request, his partner Goodnight and others returned Loving’s body to Weatherford for burial. Larry McMurtry’s epic novel and the now famous TV movie “Lonesome Dove” were based upon that Texas and Western Legend.

After Loving’s death, this ranch passed to his heirs, including his eldest son, James C. Loving — who in 1877 in Graham, along with Captain C.C. Slaughter, formed the Texas Cattle Raisers Association to deter rustling. From Loving’s notes, the Loving Brand Book was later produced, documenting over, 1,500 original early legitimate regional Cattle Owners and Brands.

This Historic Ranch has belonged to the Kimberlin Family since 1941 — the year the first dam on the Brazos River was completed here and Possum Kingdom Lake filled. Coincidentally, the scenes in Lonesome Dove of the establishment of their “Montana” Ranch were actually filmed in northern New Mexico on a Ranch owned by the Kimberlin’s now known as the Hat Creek Ranch.