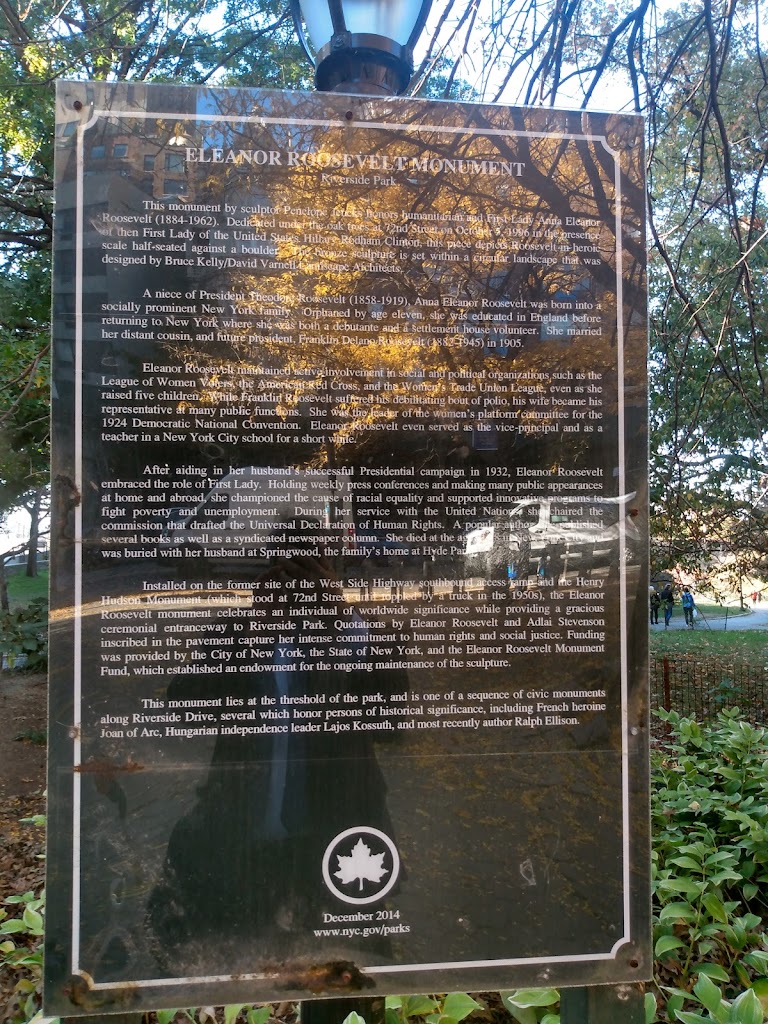 The monument by sculptor Penelope Jencks honors humanitarian and First Lady Anna Eleanor Roosevelt (1884-1962). Dedicated under the oak trees at 72nd Street on October 5, 1996 in the presence of then First Lady of the United States Hillary Rodham Clinton, this piece depicts Roosevelt in heroic scale half-seated against a boulder. The bronze sculpture is set within a circular landscape that was designed by Bruce Kelly/David Varnell Landscape Architects.

A nice of President Theodore Roosevelt (1858-1919), Anna Eleanor Roosevelt was born into a socially prominent New York family. Orphaned by age eleven, she was educated in England before returning to New York where she was both a debutante and a settlement house volunteer. She married her distant cousin, and future president, Franklin Delano Roosevelt (1882-1945) in 1905.

Eleanor Roosevelt maintained active involvement in social and political organizations such as the League of Women Voters, the American Red Cross, and the Women’s Trade Union League, even as she raised five children. While Franklin Roosevelt suffered his debilitating bout of polio, his wife became his representative at many public functions. She was the leader of the women’s platform committee for the 1924 Democratic National Convention. Eleanor Roosevelt even served as the vice-principal and as a teach in a New York City school for a short while.

After aiding in her husband’s successful Presidential campaign in 1932, Eleanor Roosevelt embraced the role of First Lady. Holding weekly press conferences and making many public appearances at home and abroad, she championed the cause of racial equality and supported innovative programs to fight poverty and unemployment. During her service with the United Nations, she chaired the commission that drafted the Universal Declaration of Human Rights. A popular author, she published several books as well as a syndicated newspaper column. She died at the age of 78 in New York City and was buried with her husband at Springwood, the family’s home at Hyde Park.


Installed on the former site of the West Side Highway southbound access ramp and the Henry Hudson Monument (which stood at 72nd Street until toppled by a truck in the 1950s), the Eleanor Roosevelt monument celebrates an individual of worldwide significance while providing a gracious ceremonial entranceway to Riverside Park. Quotations by Eleanor Roosevelt and Adlia Stevenson inscribed in the pavement capture her intense commitment to human rights and social justice. Funding was provided by the City of New York, the State of New York, and the Eleanor Roosevelt Monument Fund, which established an endowment for the ongoing maintenance of the sculpture.

This monument lies at the threshold of the part, and is one of a sequence of civic monuments along Riverside Drive, several of which honor persons of historical significance, including French heroine Joan of Arc, Hungarian independence leader Lajos Kossuth, and most recently author Ralph Ellison.