Eating and Drinking in Ann Arbor 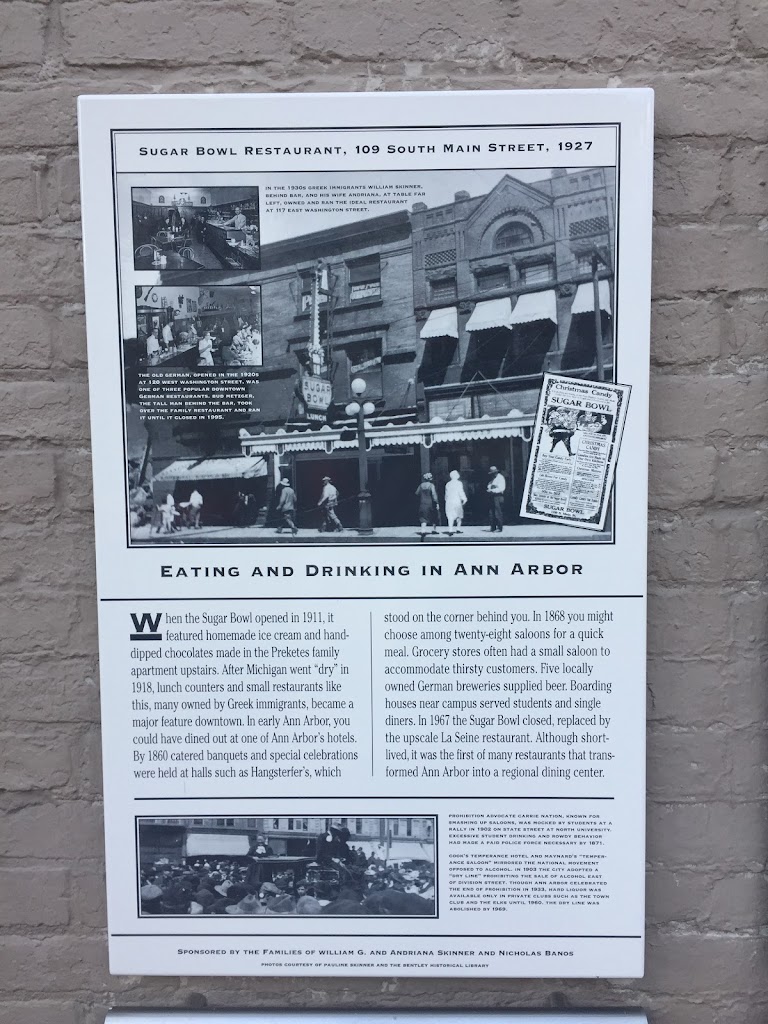 Eating and Drinking in Ann Arbor

In the 1930s Greek immigrants William Skinner, behind bar, and his wife Andriana, at the table far left, owned and ran the ideal restaurant at 117 East Washington Street.

The Old German, opened in the 1920s.  At 120 West Washington Street, was one of three popular downtown German restaurants.  Bud Metzger, the tall man behind the bar, took over the family restaurant and ran it until it closed in 1995.

When the Sugar Bowl opened in 1911, it featured homemade ice cream and hand-dipped chocolates made in the Preketes family apartment upstairs.  After Michigan went “dry” in 1918, lunch counters and small restaurants like this, many owned by Greek immigrants, became a major feature downtown.  In early Ann Arbor, you could have dined out at one of Ann Arbor’s hotels.  By 1860 catered banquets and special celebrations were held at halls such as Hangsterfer’s, which stood on the corner behind you.  In 1868 you might choose among twenty-eight saloons for a quick meal.  Grocery stores often had a small saloon to accommodate thirsty customers. Five locally owned German breweries supplied beer.  Boarding houses near campus served students and single diners.  In 1967 the Sugar Bowl closed, replaced by the upscale La Seine restaurant.  Although short-lived, it was the first of many restaurants that transformed Ann Arbor into a regional dining center.

Prohibition advocate Carrie Nation, known for smashing up saloons, was mocked by students at a rally in 1902 on State Streetat North University.  Excessive student drinking and rowdy behavior had made a paid police force necessary by 1871.

Cook’s Temperance Hotel and Maynard’s “Temperance Saloon” mirrored the national movement opposed to alcohol.  In 1903 the city adopted a “dry line” prohibiting the sale of alcohol east of Division Street.  Though Ann Arbor celebrated the end of Prohibition in 1933, hard liquor was available only in private clubs such as the Town Club and The Elks until 1960.  The dry line was abolished in 1969.

Sponsored by the families of William G. and Andriana Skinner and Nicholas Banos

Photos courtesy of Pauline Skinner and the Bentley Historical Library