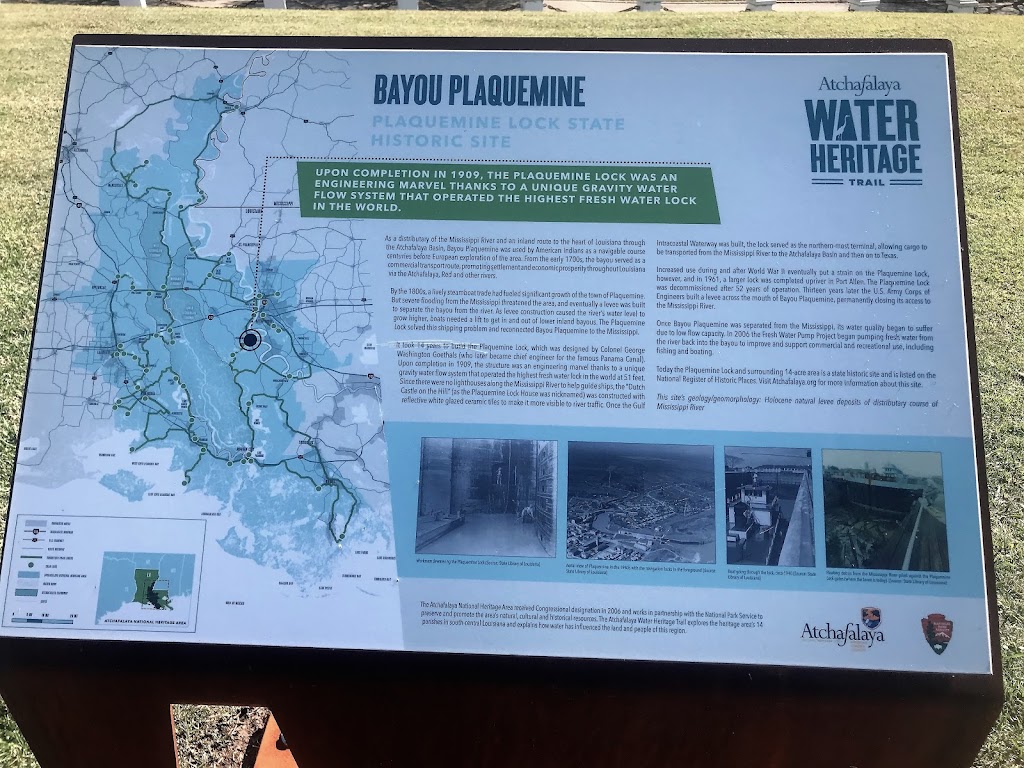 Upon completion in 1909, The Plaquemine Lock was an engineering marvel thanks to the unique gravity of water flow system that operated the highest fresh water lock in the world.

As a distributary of the Mississippi River and an inland route to the heart of Louisiana through the Atchafalaya Basin, Bayou Plaquemine was used by American Indians as a navigable course centuries before European exploration of the area. From the early 1700s, the bayou served as a commercial transport route, promoting settlement and economic prosperity throughout Louisiana via the Atchafalaya, Red and other rivers.

By the 1800s, a lively steamboat trade had fueled significant growth of the town of Plaquemine. But severe flooding from the Mississippi threatened the area, and eventually a levee was built to separate the bayou from the river. As levee construction caused the river’s water level to grow higher, boats needed a lift to get in and out of lower inland bayous. The Plaquemine Lock solved this shipping problem and reconnected Bayou Plaquemine to the Mississippi.

It took 14 years to build the Plaquemine Lock, which was designed by Colonel George Washington Goethals (who later became chief engineer for the famous Panama Canal). Upon completion in 1909, the structure was an engineering marvel thanks to a unique gravity water flow system that operated the highest fresh water lock in the world at 51 feet. Since there were no lighthouses along the Mississippi River to help guide ships, the “Dutch Castle on the Hill” (as the Plaquemine Lock House was nicknamed) was constructed with reflective white glazed ceramic tiles to make it more visible to river traffic. Once the Gulf Intracoastal Waterway was built, the lock served as the northern-most terminal, allowing cargo to be transported from the Mississippi River to the Atchafalaya Basin and then on to Texas.

Increased use during and after World War II eventually put a strain on the Plaquemine Lock, however, and in 1961, a larger lock was completed upriver in Port Allen. The Plaquemine Lock was decommissioned after 52 years of operation. Thirteen years later the U.S. Army Corps of Engineers built a levee across the mouth of Bayou Plaquemine, permanently closing its access to the Mississippi River.

Once Bayou Plaquemine was separated from the Mississippi, its water quality began to suffer due to low flow capacity. In 2006 the Fresh Water Pump Project began pumping fresh water from the river back into the bayou to improve and support commercial and recreational use, including fishing and boating.

Today the Plaquemine Lock and surrounding 14-acre area is a state historic site and is listed on the National Register of Historic Places.