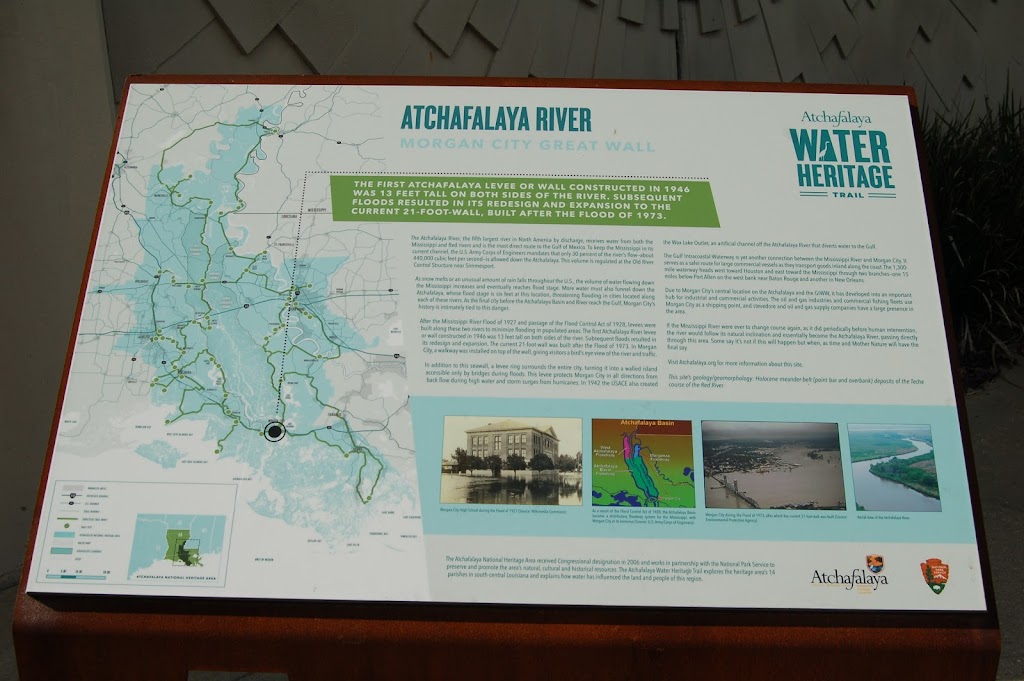 The first Atchafalaya levee or wall constructed in 1946 was 13 feet tall on both sides of the river. Subsequent floods resulted in its redesign and expansion to the current 21-foot-wall, built after the flood on 1973.

The Atchafalaya River, the fifth largest river in North America by discharge, receives water from both the Mississippi and Red rivers and is the most direct route to the Gulf of Mexico. To keep the Mississippi in its current channel, the U.S. Army Corps of Engineers mandates that only 30 percent of the river’s flow—about 440,000 cubic feet per second—is allowed down the Atchafalaya. This volume is regulated at the Old River Control Structure near Simmesport.

As snow melts or an unusual amount of rain falls throughout the U.S., the volume of water flowing down the Mississippi increases and eventually reaches flood stage. More water must also funnel down the Atchafalaya, whose flood stage is six feet at this location, threatening flooding in cities located along each of these rivers. As the final city before the Atchafalaya Basin and River reach the Gulf, Morgan City’s history is intimately tied to this danger.

After the Mississippi River Flood of 1927 and passage of the Flood Control Act of 1928, levees were built along these two rivers to minimize flooding in populated areas. The first Atchafalaya River levee or wall constructed in 1946 was 13 feet tall on both sides of the river. Subsequent floods resulted in its redesign and expansion. The current 21-foot-wall was built after the Flood of 1973. In Morgan City, a walkway was installed on top of the wall, giving visitors a bird’s eye view of the river and traffic.

In addition to this seawall, a levee ring surrounds the entire city, turning it into a walled island accessible only by bridges during floods. This levee protects Morgan City in all directions from back flow during high water and storm surges from hurricanes. In 1942 the USACE also created the Wax Lake Outlet, an artificial channel off the Atchafalaya River that diverts water to the Gulf.

The Gulf Intracoastal Waterway is yet another connection between the Mississippi River and Morgan City. It serves as a safer route for large commercial vessels as they transport goods inland along the coast. The 1,300-mile waterway heads west toward Houston and east toward the Mississippi through two branches—one 15 miles below Port Allen on the west bank near Baton Rouge and another in New Orleans.

Due to Morgan City’s central location on the Atchafalaya and the GIWW, it has developed into an important hub for industrial and commercial activities. The oil and gas industries and commercial fishing fleets use Morgan City as a shipping point, and stevedore and oil and gas supply companies have a large presence in the area.

If the Mississippi River were ever to change course again, as it did periodically before human intervention, the river would follow its natural inclination and essentially become the Atchafalaya River, passing directly through this area. Some say it’s not if this will happen but when, as time and Mother Nature will have the final say.

This site’s geology/geomorphology: Holocene meander-belt (point bar and overbank) deposits of the Teche course of the Red River.