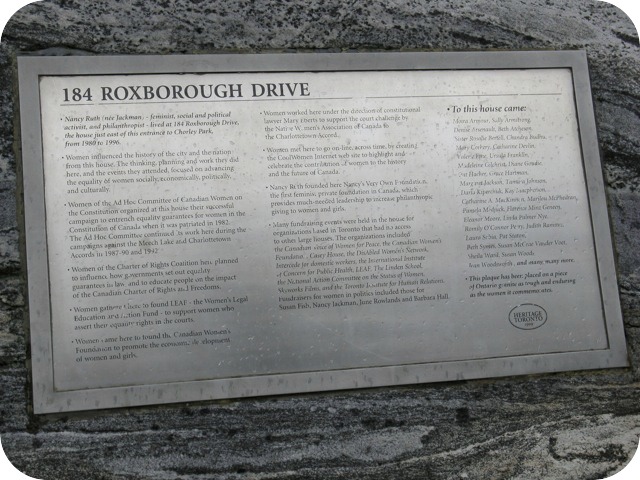 Nancy Ruth (nee Jackman) - feminist, social and political activist, and philanthropist - lived at 184 Roxborough Drive, the house just east of this entrance to Chorley Park, from 1980 to 1996.
Women influenced the history of the city and the nation from this house. The thinking, planning and work they did here, and the events they attended, focused on advancing the equality of women socially, economically, politically, and culturally.
Women of the Ad Hoc Committee of Canadian Women on the Constitution organized at this house their successful campaign to entrench equality guarantees for women in the Constitution of Canada when it was patriated in 1982. The Ad Hoc Committee continued its work here during the campaigns against the Meech Lake and Charlottetown Accords in 1987-90 and 1992.
Women of the Charter of Rights Coalition here planned to influence how governments set out equality guarantees in law and to educate people on the impact of the Canadian Charter of Rights and Freedoms.
Women gathered here to found LEAF - the Women's Legal Education and Action Fund - to support women who assert their equality rights in the courts.
Women came here to found the Canadian Women's Foundation to promote the economic development of women and girls.
Women worked here under the direction of constitutional lawyer Mary Eberts to support the court challenge by the Native Women's Association of Canada to the Charlottetown Accord.
Women met here to go on-line, across time, by creating the CoolWomen Internet website to highlight and celebrate the contribution of women to their history and the future of Canada.
Nancy Ruth founded here Nancy's Very Own Foundation, the first feminist private foundation in Canada, which provides much-needed leadership to increase philanthropic giving to women and girls.
Many fundraising events were held in the house for organizations based in Toronto that had no access to other large houses. The organizations included the Canadian Voice of Women for Peace, the Canadian Women's Foundation, Casey House, the DisAbled Women's Network, Intercede for Domestic Workers, the International Institute of Concern for Public Health, LEAF, The Linden School, the National Action Committee on the Status of Women, Skywords Films, and the Toronto Institute for Human Relations. Fundraisers for women in politics included those for Susan Fish, Nancy Jackman, June Rowlands and Barbara Hall.
To this house came: Moira Armour, Sally Armstrong, Denise Arsenault, Beth Atcheson, Sister Rosalie Bertell, Chandra Budhu, Mary Corkery, Catharine Devlin, Valerie Fine, Ursula Franklin, Madeleine Gilchrist, Diane Goudir, Pat Hacker, Grace Hartman, Margaret Jackson, Tamara Johnson, Dario Kiperchuk, Kay Macpherson, Catharine A. MacKinnon, Marilou McPhedran, Pamela Medjuck, Florence Minz Geneed, Eleanor Moore, Linda Palmer Nye, Romily O'Connor Perry, Judith Ramirez, Laura Sabia, Pat Staton, Beth Symes, Susan McCrae Vander Voet, Sheila Ward, Susan Woods, Jean Woodsworth, and many, many more. This plaque has been placed on a piece of Ontario granite as tough and enduring as the women it commemorates.